What comes to your mind when you hear ostrich people?

They are called so by some people as their feet appear, somewhat like- an ostrich feet.

These are vaDoma people also known as Bantwana tribe (Bantwana means “descendants”) Doma or dema who live generally in Sipolilo and Urungwe districts of the Kanyemba region in Northern Zimbabwe. The region is located around the basin of the Mwazamutunda river or Zambezi river. They speak in the Dema language.

Their middle three toes are absent and the two outer ones are turned in. The condition resulted in the tribe being referred to as the “two-toed” or “ostrich-footed” tribe. However, not everyone suffers from this condition.

It affects only the feet of one in four children within the vaDoma population. They can still walk but with some difficulty. It’s extremely difficult for them to run. However, it is supposed that this condition helps them to climb trees. They can not wear shoes.

Those with this condition are not considered as disabled and are well integrated within the community.

This tribe is regarded as the only non-agricultural society with stereotypes naming them ‘stone age cave-dwellers’. Their lifestyle consisted of hunting but now it’s problematic for them as they do not have the license to hunt. Some of them have now abandoned their lifestyle of hunting.

Science behind these Ostrich People

This condition of their feet is what we call “Ectrodactyly” which is an inherited dominant genetic mutation. Some have theorized that this mutation may have an adaptive role if it aids in tree climbing. This mutation affects only the feet of one in four children within the vaDoma population.

It’s more likely that the defect remains prevalent in the Vadoma because of a small genetic pool among the Vadoma. Since they remain mostly isolated and the tribal laws forbid them to marry someone outside the community.

Ectrodactyly occurs at lower rates throughout the world and can be caused by a number of human gene defects, a common one being a mutation of the 7th chromosome.

Derived from Ektroma meaning abortion and Daktylos (finger), involves the absence of one or more central digits (fingers or toes) of the hand or foot and is also known as split hand/split foot malformation (SHFM). This may give the hands and/or feet a lobster claw-like appearance.

Ectrodactyly can be caused by mutations to 7q as an alteration through deletion or translocation on a chromosome. It can sometimes be associated with hearing loss.

SHFM type 1 is the only form of split hand/ malformation associated with sensorineural hearing loss.

A large number of human gene defects can cause Ectrodactyly. The most common mode of inheritance is autosomal dominant form, while autosomal recessive and X-linked forms occur more rarely.  Dominant genetic disorders require only a single copy of an abnormal gene for the expression or appearance of the disease. Ectrodactyly can also be caused by duplication on 10q24.

Table-01, Showing types of Ectrodactyly and location of mutation below

Split hand/split foot malformation affects males and females equally. Frequency is estimated at one out of 90,000 newborns.

There are different myths.

Some people of the tribe believe that their ancestors were bird-like beings who came to earth from the stars system of Sirius and mated with females on earth and first established their colonies on a planet they refer to as Liitolafisi within our solar system.

Another mythology says that their ancestors emerged from a Baobab tree, and as soon as they evolved they started walking upright and immediately moved on to their routine of hunting and gathering fruits of the land.

We should never spread any stereotypes and no one should call them ostrich people. Remember, these are people just like us and they have names. They have their own believes and individuality. 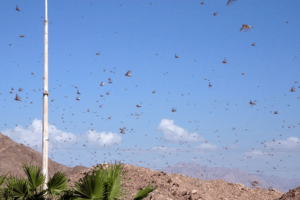 What are locusts? Locusts belong to a species of grasshoppers that belongs to the family Acrididae. This is a broad category consisting of various species of the Acrididae family. They are well known for their swarming habit. These species are usually solitary but change their behaviour to gregarious and nomadic.  Locusts sightings in India These…